At the end of June, Christine Easwaran, the wife of Eknath Easwaran and co-founder and Life Trustee of the BMCM, celebrated her 100th birthday. To mark this momentous occasion, the BMCM Programs Team invited members of the BMCM spiritual family around the world to send in a card or email telling how Easwaran’s spiritual teachings have impacted their lives. Christine received over 400 messages and read each one closely.

To continue honoring Christine in this news story we are sharing some of Easwaran’s writings about her. We’ll highlight some of the common themes in the birthday messages that she received, and give an announcement about the upcoming Celebration of Easwaran’s Life & Teachings.

Easwaran first met Christine in 1960, soon after he arrived in Berkeley, California on the Fulbright exchange program. In this excerpt from With My Love and Blessings he describes his meeting with Christine, the years they spent living on the Blue Mountain in India focused on their spiritual disciplines, and their return to the United States to start the work of the BMCM.

I knew my work would start as soon as I reached Berkeley. I spoke to large audiences at the university and to smaller groups around the Bay Area. Many only wanted to read about the spiritual life, but in every audience I found a few with a window open, and that open window would bring them up after the talk to ask practical questions. “Can we learn to do this in America? Can we learn to do this in Berkeley? Can I lead the spiritual life with my family, or do I have to drop out and go to the Himalayas? Can someone like me really attain the vision of God?”

In one such talk, in a bookstore on California Street in San Francisco, I met Christine. She had come to the Bay Area in February 1960 just like me; it took till August for us to find each other. I had been speaking on the Katha Upanishad and the conquest of death, my perennial theme, and my words went down so well that in a moment of enthusiasm I gave instructions in meditation and said, “Now let us try it.” We all closed our eyes, and in a short time I went deep, deep in. I forgot California Street, forgot San Francisco, forgot everything outside. And when I came out, only three people were in that room: myself, Christine, and the owner of the bookstore, who was waiting impatiently to close.

With the arrival of Christine, most of my problems were solved. She was my driver, my secretary, my accountant, everything. At that time I had speaking engagements in at least four places around the Bay Area. We consolidated them all in a little place at 1333 Walnut Street in Berkeley – “where Creation began.” I didn’t have any money, Christine didn’t have any money, and naturally everyone advised us to levy some fees. It was tempting, but we resolutely set our face against it. Even if we had to go without food, we would not charge.

For a while we had a difficult time. Christine was working eight hours a day in the city then; she came over after work to prepare my dinner and then drive me to class. But little by little, beginning with Mary, people began to come and help.

We had just got the Blue Mountain Center of Meditation incorporated when I was called back to India in January 1962 to fulfill the terms of the Fulbright. Christine joined me two weeks later, leaving Mary in charge. It took four years for us to return, and all that time it remained unclear just where and how the work of our new meditation center would unfold. Perhaps in some other state, perhaps in Canada; I thought again of England. Perhaps it would even be on the Blue Mountain. Right next to our home lived an English lady who invited us to lead the meditation at a nearby ashram; soon I had a speaking schedule there as busy as in Berkeley.

Those were precious years. We had no worldly responsibilities – no income and no responsibilities. My mother was there, my sister was there, we had no household duties, so we could devote ourselves completely to our spiritual disciplines. We had long hours of meditation every morning – I wouldn’t recommend those hours to anyone today – and after breakfast we must have walked for hours and hours each day repeating the mantram, with another long meditation together in the evening. And there were memorable instances of what in India is called darshan, the blessing of being in the presence of a man or woman who has realized God. We visited Swami Ramdas and received his blessing, and one glorious week at Vrindavan, where the historic Krishna grew up, we were able to visit one of India’s greatest woman saints, Sri Anandamayi Ma, who gave her blessing by taking a garland from her own neck and placing it over Christine’s.

Most significant for the future, perhaps, was an encounter with some Franciscan friars who had come up to the Blue Mountain for the summer to escape the heat of the plains. They invited me to their monastery to speak, and I looked upon it as an invitation not so much to address them as to kneel before Saint Francis. I was, in their eyes, neither a Catholic nor even a Christian, let alone a Franciscan. But they were deeply responsive, and one night Saint Francis appeared to me in a vision and his grace entered my heart. Perhaps that is why I chose the prayer of Saint Francis among all the thousands of passages to recommend for meditation. If you can see through the words as I do, I see Francis in that prayer. It is not by him; it is him. The proof was that those words came alive in my consciousness and began to shape my life. When you have driven that prayer deep into your consciousness in meditation, it means that you have become an instrument in the hands of the Lord for peace wherever you live. It is not a little prayer. It’s a kind of blessed bomb that bursts in your consciousness. Once you have this tremendous experience, every deed that you do, every word that you speak, every thought that you think, will have this stamp. That’s what a little prayer can do.

Perhaps you can see now that it is not just me and Christine doing this work together. There is an indescribable power behind that pushes us on. It has given me a certain limited choice: to use Gandhiji’s image, I don’t have the wide choice of the sea, just the choice of rooms on a ship. But even within that limited choice we can make great contributions to the welfare of the world.

All in all, we had almost four full years on the Blue Mountain to devote completely to meditation and the allied disciplines. It was perfect preparation for what lay ahead. I had never had such an opportunity before and we never had it again. For in December 1965, when Sri Krishna must have decided that we were ready for Berkeley and Berkeley was ready for us, the obstacles to our return fell away and we plunged into the maelstrom of this work with Sri Krishna as our ferryman. And I never looked back.

Throughout the month of June Christine received cards and emails from friends around the world. Each day, she set aside time in her schedule to read through the most recent arrivals, giving them her full attention. Christine also loved seeing all the photos that came in: photos of friends in nature, large family portraits, photos of pets, photos with Easwaran’s books, photos of meditation spots, and photos of favorite mantram walk routes. How often we heard that sweet Southern drawl, “Oh how sweeeet!” 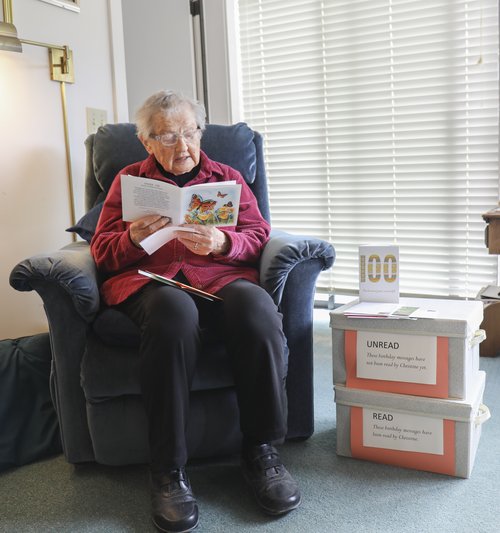 Many friends shared fond memories of meeting Christine in person, often through retreats at the BMCM headquarters in Tomales, California. And equally, many correspondents said that though they had never had the opportunity to meet Christine, Easwaran’s teachings had become such a central part of their lives that it felt to them as though they did know her personally.

Some messages came from friends who met Christine and Easwaran in every decade going back to the 1960s, and some from people who had only learned of Easwaran’s teachings and the BMCM in the last year.

“Just as there was a cultural renaissance in the West several centuries ago, the world needs a spiritual renaissance today. It can be brought about only by little people like us: every man, every woman, every child, changing their personality from selﬁsh to selﬂess, from human to divine.” – Eknath Easwaran

The makings of a spiritual renaissance shone brightly through Christine’s birthday cards, with glimpses into households of “little people” around the world doing their best to live out their spiritual ideals. The simple, humble, and loving stories portrayed a spiritual family that is strong and deep, even in the midst of crisis. As she read, Christine pointed out how friends are supporting their communities and the world in ways that honor their role as Easwaran’s students, and nothing could make her happier.

As “Christine’s 100th Summer” moves into fall, we’re looking ahead to the six-week Celebration of Easwaran’s Life & Teachings beginning on September 17th, culminating in a day of mantrams for peace and healing in the world on Sunday, October 24th. At a time when we see suffering throughout the universe, in our environment and in life forms great and small, and as our fellow beings face cascading crises, Christine’s 100th summer has shown us the tremendous resilience and beauty of our spiritual family. The six weeks building up to Easwaran’s life celebration will be an opportunity for augmenting our spiritual family’s unity.

In the coming months we’ll share more details about the ways in which you can join in, right from where you are. We are eager for the opportunity collectively to give our best effort to our meditation during the month of October and to continue working together on Easwaran’s spiritual renaissance.

Finally, it’s not too late to send a message to Christine – you can leave it below in the comments on this page or email it to Christine.birthday@easwaran.org.